Marshalls of Sutton on Trent Ltd

Marshalls of Sutton on Trent Ltd is a family business established for over 30 years and with more than 40 years experience in passenger transport.

The Marshall family have lived in Sutton on Trent for over 200 years and by tradition were basket makers.. This is reflected in the company crest which symbolises both basket weaving and bee keeping along with the River Trent running through its center.

Located on the Nottinghamshire and Lincolnshire border, next to the A1, we have excellent road links to all parts of the UK.

We specialise in Private Hire, School Trips, Day Excursions within our local area, the UK and Europe. Please contact us to arrange a quotation or for advice on excursions or to discuss your private hire requirements.

All of our vehicles are maintained to the highest standards by our qualified engineers on site, who hold the highest OCRS score with DVSA. All front line coaches are LEZ (Low Emission Zone) compliant for entry into London and other major European cities. Coaches also have air conditioning for your comfort. Executive coaches have a host of other luxury features for your added journeying pleasure.

We have coaches from 25 to 53 seats and double deck buses with 82 seats – all with seatbelts. All buses and coaches are cleaned and serviced regularly to a high standard to ensure your comfort and safety.

Follow the links below to find out more about CoachMarque and The Guild of British Coach Operators.

At Marshalls everyone works together as a team, from the fitters to the drivers through to the office staff and management.
“Please let me introduce our experienced staff”.

John Marshall, Managing Director: John was the founder of the business in 1989 and has guided the business into becoming the successful operation it is today. For many years he was the main driver, but he now he then a more managerial role, getting involved with CPT and other bus and coach organisations. John still has strong links with the bus and coach industry and spends his time restoring the older vehicles.

Thelma Marshall, Director: Thelma has been very involved in the company from the beginning often running the office whilst John was out driving and building the business. Thelma often still comes into the office on a daily basis and can often be seen running errands for the engineering department.

Sally Sloan, Financial Director: Sally joined Marshalls in 2001 on a part time basis to look after the accounts of the business, overseeing every penny earned and spent!

Paul Marshall, Engineering Director: Paul is in charge of looking after our fleet of vehicles and making sure that we always have enough vehicles to fulfil our requirements on a daily basis. Paul and his team undertake all types of engineering work from routine checking to full mechanical overhauls.

Simon Read, Transport Manager: Simon joined Marshalls in October 2014. Simon has been in the industry all of his life, starting as a mechanic and working his way up to the present role that he holds now. Simon’s knowledge and background will be very important to us as a company.

……”and now to introduce our engineers”. 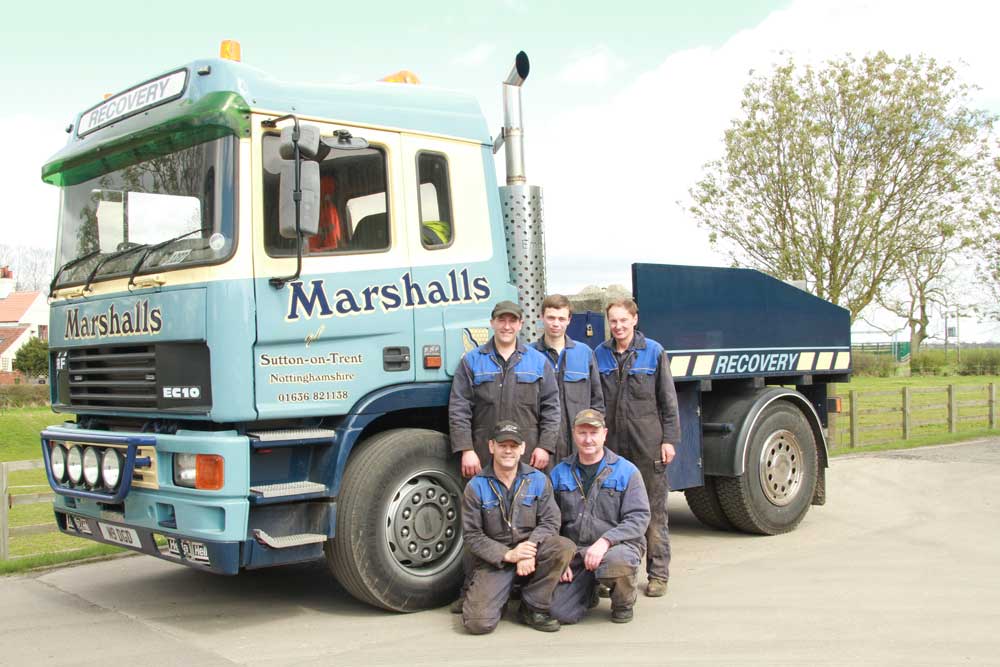 Paul, Bob, Jacob, Tony and Sam all maintain our fleet to DVSA standards. Our service buses are inspected every 4 weeks and coaches every 6 weeks. Our OCRS records show we are rated at the highest level of compliance.

You can find out more about which cookies we are using or switch them off in settings.

This website uses cookies so that we can provide you with the best user experience possible. Cookie information is stored in your browser and performs functions such as recognising you when you return to our website and helping our team to understand which sections of the website you find most interesting and useful.

Strictly Necessary Cookie should be enabled at all times so that we can save your preferences for cookie settings.

If you disable this cookie, we will not be able to save your preferences. This means that every time you visit this website you will need to enable or disable cookies again.

This website uses Google Analytics to collect anonymous information such as the number of visitors to the site, and the most popular pages.

Please enable Strictly Necessary Cookies first so that we can save your preferences!